Home » How Much Money Do Smart Phone Owners Actually Spend on International Calls?

Extraplating from the results of a survey conducted by Harris Interactive on its behalf, Rebtel estimates that U.S. mobile users could be spending $38 billion a year on international calls on their smart phones, annually.

Rebtel estimates, based on its survey results, that 21 percent of U.S. adult smart phone owners make international calls and spend an average of $156 every month doing so, Rebtel says.

If, according to the 2010 U.S. Census, there are 234.6 million adults age 18 or older in the United States, with 41 percent of the population owning a smart phone, and 21 percent of these people making international calls on their smartphones, then roughly 20 million Americans are spending nearly $38 billion a year on international calls on their smart phones annually, Rebtel argues.

Some might find that estimate fanciful. Visiongain calculates that in 2012 the global mobile VoIP market will see revenues of $2.5 billion.

Also, if U.S. mobile voice overall is about $120 billion, the Rebtel estimate would have international long distance comprising about 32 percent of all U.S. mobile voice revenues overall, a figure that seems unlikely.

It is hard to reconcile total retained international calling revenues, on all networks, of $4 billiion, as reported by the FCC in 2011, with an estimate of U.S. smart phone calling of $38 billion.

Granted, it is harder these days to tally actual revenue, as more activity shifts to over the top IP mechanisms.

At some point, the estimates might be even harder to make, as mobile service providers switch from 3G networks for voice services, over to voice over LTE (voLTE), which will operate fundamentally in the same way as over the top mobile voice, the difference being the ownership of the services.

Still, the Rebtel estimate seems inflated. One has to assume that the sample was not representative of the typical base of smart phone users, or that respondents somehow misunderstood or inaccurately recalled their international long distance spending. 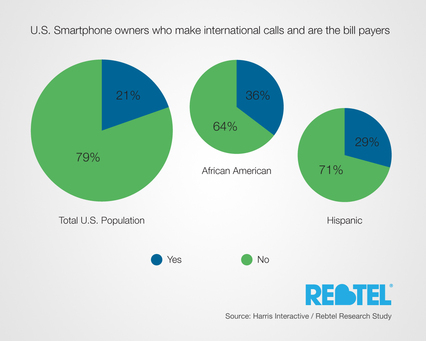