Home » How Much Better Can Telcos Do in IPTV Business?

For anybody who has followed the U.S. video entertainment market for some decades, that U.S. cable operator video penetration is as low as 44 percent of TV homes is a shocking statistic. There was a time when penetration was as high as 70 to 80 percent of homes in some areas.

Competition from satellite and telco competitors is the reason for the sharp reversal.

Telco IPTV penetration on a global basis, measured agains the installed base of worldwide broadband subscribers, reached 15 percent in the first quarter of 2012, representing 67 million subscribers and eight percent of the world’s 812 million video entertainment service subscribers, according to TeleGeography.

But keep in mind that telcos are not able to sell video to many locations, using their fixed networks, for technology reasons. Where they can do so, market share could be in the 30 percent range.

Generally speaking, getting a video customer means taking that customer away from a cable TV or satellite TV provider who already had the customer, as household penetration of subscription TV is over 80 percent. The market, in other words, is saturated.

There are some important implications. You might well argue that 40 percent video penetration of a service provider’s own customer base is “about as good as it is going to be,” when strong cable TV and satellite TV competitors own the rest of the customers, and when taking a customer therefore is tough.

In any market with three dominant and well-heeled contestants, you might expect an ultimate market share distribution that could easily be split three ways, with any single contestant getting 20 percent to 40 percent share.

If telcos have 20 percent share, could that share double? In principle, yes. If telcos get 30 percent share, could share then double again? Probably not, if the other two contestants (satellite and cable) continue to perform at a high level.
But there is one big change in potential market share structure that long has been speculated, namely a purchase of both U.S. satellite companies by one of the tier-one U.S. telcos. That, in principle, could mean telcos then would have as much as 60 percent share of video service customers.

For the moment, telcos are doing about as well as they can, using only their fixed networks. 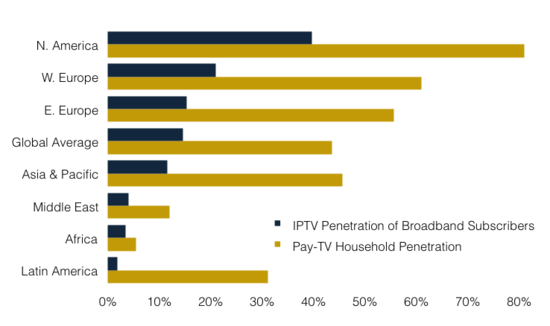