Home » How Disruptive Will $50 Amazon Fire Tablet Be? 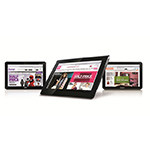 The $50 Amazon Fire tablet, priced markedly below an average vendor selling price of $323, is causing disruption in the tablet market, particularly among tablet OEMs that lack content delivery platforms or channels, ABI Research highlights on its Tablets and Pervasive Computing Service.

“Unlike other tablet manufacturers, Amazon views hardware as a commodity and emphasizes focus on its recurring digital content revenue stream, generated from selling digital books, music, TV, and video programming to owners of its devices,” ABI research director Jeff Orr points out. “The incredibly low pricing of the Fire Tablet is a smart and strategic move, as few others can afford to accept a lower margin on their tablet devices in favor of driving a surplus of content-related revenues.”

Impact of $50 Amazon Fire Tablet
Amazon racked up estimated unit sales of 5 million tablets in 4Q 2015, enough to rank third in ABI’s quarterly ranking. That was up from 1.5 million a year earlier.

Apple led the market for the full calendar year as well, selling an estimated 49.million iPads. Samsung sold 34.1 million to rank second, while vendors outside the top 5 sold 30.3 million.

Lenovo ranked third among tablet OEMs for 2015, selling an estimated 11.5 million units, according to ABI. Huawei ranked fourth with 7.7 million unit sales, while Amazon followed closely behind, selling a total of 7.6 million.

It remains to be seen whether or not Amazon’s competitors respond by lowering their own prices, Orr noted.

“Most tablet vendors continue to take a wait-and-see approach to Amazon’s Fire Tablet release,” he said. “It’s a path only few can follow, as vendors without content distribution rights and value-added services can only rely on the transaction price of their hardware to stay in business.

“For instance, LeEco, formerly LeTV, in China is attempting a similar model. Conversely, content owners may find value in broadening their ecosystems by striking relationships with tablet vendors to get their programming in front of more users.”