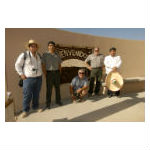 The opening last year of the Boquillas Crossing between the U.S. and Mexico after a decade-long closure was made possible by fiber optic communications provided by Big Bend Telephone, the rural telco serving the Texas side of the border. The U.S. side of the crossing is now located in a ranger station in Big Bend National Park, where people entering the U.S. interact with remotely located border agents using videoconferencing underpinned by BBT fiber, explained Rusty Moore, general manager and chief operations officer for BBT, in an interview.

“We had a rich history with Homeland Security; we feed the port of entry at Presidio,” said Moore. BBT also provides communications service in Big Bend National Park, which shares a 118-mile border with Mexico.

Homeland Security Telecom Requirements
When crossing the border at Boquillas was curtailed after the attack on the World Trade Center in 2001, it left a stretch of 300 miles along the U.S.-Mexico border without a legal crossing point, explained Moore. The move also put a damper on local tourism, as one of the highlights of visiting Big Bend National Park had been the ability to take a ferry or wade across the Rio Grande to Boquillas, Mexico, which Moore described as a place of “Old World charm” that is cut-off geographically from more modern areas of Mexico.

“Historically there were a number of crude crossings that were only used locally pre-9/11,” explained Moore. After that date, he said, “all of them were shut down and barricaded.”

The net result, Moore said, was “a huge disruption to the local economy – it forced traffic 100 miles one way, then 100 miles back” to get to Boquillas. With the crossing re-opened visitors to Big Bend National Park once again have the opportunity to cross into Mexico and to purchase local crafts and meals – or even stay in a local motel for as long as seven days. There is no vehicular traffic between the U.S. and Mexico at Boquillas Crossing. Tourists arriving from the U.S. are greeted on the Mexican side by natives who offer them burro or truck rides into Boquillas.

According to Moore, having a legal crossing point at Boquillas has improved security in the area. “There is more of an awareness [that] it’s for legal traffic,” said Moore. “The bad guys aren’t going to cross there.”