Home » Has Apple Done it Again?

Virtually every company that competes with Apple is well aware of the fact that Apple often creates a new product category, then dominates it. Our colloquial way of describing that process is to day that there is an iPod market, not an MP3 market, or an iPad market, not a tablet market.

At least so far, that seems to be true in the business buyer market, as well as the consumer market.

A ChangeWave survey of 1600 business technology buyers in the United States found that 22 percent expected to be buying tablets during the second quarter of 2012, and 84 percent will be buying Apple iPads.

Advertisement
Though one never knows what will happen in the future, some competitors might fear the worse, namely that Apple has once again created a hot new product category that it will “own,” in terms of market share.

Since November 2010, iPad share of buying intentions has hovered in the 77 percent to 80 percent range, according to ChangeWave. 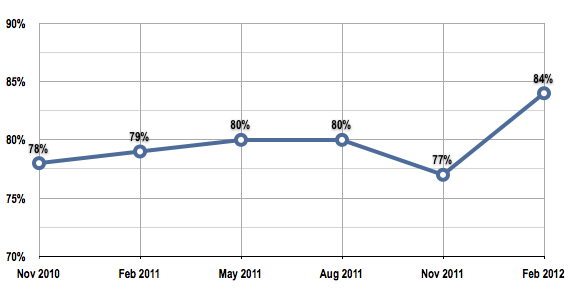 
The adage that “there is no tablet market, only an iPad market” is no longer as true as it was a few years ago. But it still might be fair to say there is an iPad market, and then a tablet market. When one supplier has 70 percent market share, it is analogous to the MP3 player market, which wound up being an iPod market, with some other providers.

In 2011, for example, Apple continued to hold 78 percent of the music player market. That is what “terrifies” other competitors. Apple has more than once showed an ability to dominate a new consumer electronics category.

The mobile phone market is more complicated, as Apple does not compete in the feature phone category. In the smart phone category, Apple has about 30 percent share, globally.

More tellingly, Apple seems to be, far and away, the most profitable smart phone manufacturer. Right now, one has to wonder whether Apple has done it again, creating a new category which it dominates.