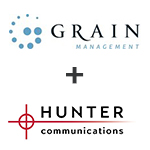 Private equity firm Grain Management LLC is emerging as a major fiber network consolidator. In the past week, the company announced two network operator acquisitions, after having previously announced several others in the last year or so.

Grain Management’s latest acquisition, announced earlier this week, is Hunter Communications, a provider of voice and data services to businesses and homes in southern Oregon and northern California that also has a 2,000-mile fiber network.

The latter asset seems to be of greatest interest to Grain Management, as a Grain Management managing director is quoted in the release as saying that the investment firm’s “value creation strategy” will focus on densifying and expanding Hunter’s footprint and advancing “its position as a leading regional connectivity provider.”

The day before, Grain Management said it would acquire Summit Broadband, a fiber network operator in Florida.

Fiber Network Consolidator Grain Management
Grain Management did not immediately respond to an interview request from Telecompetitor to talk about its acquisition strategy, but a review of the other acquisitions Grain Management has made in the last year or so indicates an emphasis on regional fiber networks. Initially the company appeared to be concentrating on the central U.S., but the planned Hunter and Summit acquisitions suggest the company is casting a wider net.