Home » Google Looks to Bridge Laptops and Tablets with Chromebooks – But Why? 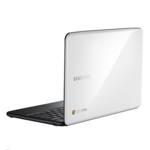 Google has a lot of goals with their newest product, the Chromebook. I describe it as a cross between a tablet and a laptop, or maybe a tablet with an attached keyboard. They appear to be trying to bridge the two, while also taking a jab at Microsoft. But is it a solution looking for a problem?

Chromebooks will be built by familiar names, including Samsung and Acer for now. As far as form factor, they’re very similar in appearance and functionality to a netbook, with some striking differences though. They operate Google’s latest operating system, Chrome. They have no onboard applications like a traditional laptop or netbook – everything you do with a Chromebook is tied to the web, or the cloud as it’s called these days. Don’t look for Microsoft Office or Windows on a Chromebook (although I’m sure workarounds are already underway) – more on that later. More detailed specifications for Chromebooks may be found here.

Google is tying Chromebooks to their web applications like Google Apps, where you can get your email and work on documents with Google Docs, all online. All of your data is stored in the Google cloud and the Chromebook is simply the tool to access it.  They will sell for $300 – $500 each, or you can ‘subscribe’ to them for $20/month for a three year term ($28 for business customers). They go on sale beginning June 15th.

Chromebooks are an intentional departure from the Microsoft way of doing things, where your PC runs Microsoft applications locally and occasionally interacts with the web. With Chromebook, the web is your application, and everything is done in the cloud, rather than locally on the PC. There is already a Chrome App store. Google says Chromebook will eventually offer off line usability, for that ‘rare’ occurrence when you are not connected to the cloud.

Because the Chromebook is a cloud connected device, Google also says it will regularly be updated, at no additional cost. It’s a similar approach to Android smartphones, where newer versions of Android are downloaded automatically to the device – another swipe at the Microsoft model, whose ubiquitous operating system Windows is updated for a cost every couple years.

Speaking of Android, one has to ask, why yet another OS from Google? Android has intentions well beyond smartphones, including managing your home. I’ve speculated that Google wants to make Android our ‘life OS.’ Does Chrome confuse the issue? Maybe it’s a hedge. Better to have some options out there in case one does not reach your goal of human species domination.

My other question, is why Chromebook at all? From my cursery analysis, it just seems like a tablet with a connected keyboard. For those who like keyboards, there are plenty of keyboard add ons for tablets which cost much less than $300 or $20 per month. My sense is people who like laptops over tablets won’t see Chromebook as any different than a tablet. People who want to replace their laptop with a tablet will do so, not replace their laptop with with a tablet, disguised as a laptop. Is there really a need for a hybrid?

Regardless of that debate, it is important to recognize the implications of Chromebooks and tablets in general. They drive consumer expectation for always on connectivity, everywhere. Their penetration is only growing, dramatically so for tablets. They will challenge service providers, both wireless and wireline alike, to not only have the network capacity to support them, but have it everywhere.