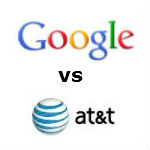 Leawood, Kansas is an example of the interesting competitive dynamics forming around gigabit Internet and AT&T versus Google. Google recently decided to opt out of an agreement to build Google Fiber in the Kansas community and AT&T has now come in behind them and agreed to fill the gigabit void with their U-verse Gigapower service. The Leawood, Kansas city council was to vote on the new AT&T proposal as early as yesterday evening, according to a story in the Kansas City Star.

Google Fiber Opts Out
The debate apparently centers on rights-of-way issues. The local paper reports that Google requested rights-of-way to existing poles for the construction of Google Fiber, but apparently was denied, although the details haven’t been revealed as to exactly what the dispute was about. As a result, Google decided to pull out and not build in the Kansas community.

Seeing an opening, AT&T, who as the incumbent provider already has rights-of-way and existing infrastructure, seized on the opportunity to step in and build gigabit infrastructure.

The move is indicative of the evolving marketplace for gigabit services. Google has changed the game for overbuilding by extracting demands from communities to build their Google Fiber infrastructure. It allows them to be very choosy about what communities they serve and how they build their network in them.

With Leawood, they are demonstrating they are not afraid to pull out if those demands aren’t met. It’s an exercise that Google hopes other communities take note of, as they look to aggressively expand their Google Fiber footprint by inviting a slew of other markets to basically ‘bid’ for the right for Google to build Google Fiber.

AT&T Sees an Opening
You might argue that the competitive threat of Google Fiber awakened AT&T, who shortly after Google’s announcement to expand Google Fiber out of Kansas City into Austin, embarked on an aggressive gigabit FTTH initiative of their own. That initiative may ultimately see them in 100 markets with Gigapower.

In Leawood, AT&T sees an opportunity not only to defend their turf, but also to get some positive PR by ‘coming to the gigabit rescue.’ In fact, AT&T and Google are set to become pretty fierce rivals in the broadband space in multiple markets. AT&T got to market first in Austin with Gigapower and has targeted several markets on Google Fiber’s expansion list to bring their version of gigabit Internet as well. It should make for an interesting competitive battle.

9 thoughts on “Google Fiber Opts Out, AT&T Steps In”