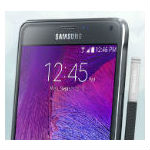 Mobile phone users can’t seem to get enough of phablets – smartphones with screens of 5.5 inches and larger, according to the latest market research from GfK. Phablet sales have been outpacing overall consumer demand for mobile devices since Samsung’s launch of the Galaxy Note in 2012, GfK highlights in a news release.

Sales reached a new high in 4Q 2014 as phablets accounted for 12.8 percent of global mobile device sales, according to GfK’s market data.

Phablet prices have been falling as consumer demand has grown. “The increase in phablet sales volume was accompanied by a fall in average price – perfect conditions for sales to take off,” GfK highlights.

“The phablet’s not-so-secret weapon is its screen size, perfect for consuming the media content people have become addicted to,” GfK’s Global Director of Telecoms Arndt Polifke was quoted in a press release.

“Phablets are all-rounders, fulfilling the combined roles of a smartphone and tablet – but for a lower price than just one of these devices.”

Looking forward, GfK sees consumers continuing to choose phablets over smartphones with standard screen sizes. Polifke cited two big reasons: “[F]irstly, the appeal of a hybrid phone/tablet is particularly strong in emerging markets where consumers can now make a choice between a basic smartphone and one with tablet capabilities for almost the same price.

“Secondly, more affordable models are coming to market, with a number of models now available for $150 or less, making them accessible to many more people. For the tech-obsessed consumer, more sophisticated models are available for $800 plus. With their multiple uses and price points from low to high, the phablet is poised for greatness in 2015.”