Home » G.hn on the Way: Should Make Home Networking Much More Interesting 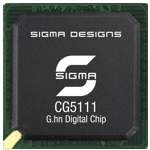 I’ve been covering home networking, and the digital home by extension, for some time now. I believe the digital home is an ultra-important segment for broadband carriers – a battlefront if you will – as they look for ways to strengthen customer relationships and grow incremental revenue.

A new development from Sigma Designs – the first G.hn standard chipset – should make the digital home segment even more interesting. G.hn is an IEEE ITU networking standard for the distribution of data throughout the home. It’s another way to distribute content between a broadband gateway and all of the IP enabled devices throughout the home, including set-top-boxes. Other standards exist for this task, including HomePNA, MoCA, Wi-Fi, HomePlug, and even plain Ethernet.

G.hn enables home networking across three mediums – telephone wire, coax cable, and home electric wiring (powerline). “By using all three wires in the home (coax, phone lines and power lines), Sigma’s G.hn chipset will enable home networks that can run up to 3Gbps,” says Sigma Designs in their press release announcing the new G.hn chipset. To clarify, that’s 3Gbps if all mediums were used simultaneously. One gigabit per second is what G.hn supporters claim for a single medium.

For Sigma, the real opportunity, they believe, lies in powerline networking through the home. “We’re going to make powerline networking relevant,” Michael Weissman, VP of corporate marketing for Sigma tells me. In-home powerline does have some advantages over other mediums because of its ubiquitous nature, both inside the home (outlet in practically every room) and its presence in every household.

In-home powerline networking has seen a series of fits and starts, but has not gained the traction of other home networking technologies like MoCA or Wi-Fi, particularly in North America. Weissman thinks that will change. Issues like attenuation from surge protectors and other outlet issues in the home have impeded the network performance of powerline networking.

Sigma has developed a technology they call Clearpath, which addresses many of these issues and adds MIMO technology to their platform. “We can now deliver the type of performance over powerline that people only once dreamed of,” says Weissman.

Weissman believes G.hn will make self installs from everything like IPTV to whole home DVR to ultra-fast in-home broadband networks a reality for service providers. “G.hn is transformational because every power outlet in your house will now be IP and broadband enabled,” he tells me. With this self-install capability, Weissman believes service providers can save $300-$400 in an IPTV installation, providing competitive advantage for those who choose the G.hn route.

Of course, G.hn is not without its detractors, namely its chief competitor in the North American market – MoCA. We’ve highlighted some of the ongoing debates between MoCA and G.hn advocates before. MoCA supporters would passionately disagree with some of these G.hn claims.

Weissman points to the 60 to 70 service providers (from across the globe) who are either using HomePNA or HomePlug today as shoe-ins for migration to G.hn (it is backwards compatible to these standards). And he doesn’t rule out cable companies someday taking a hard look at the networking technology either. “The competitive advantage that G.hn will bring telcos is unsustainable for cable companies over time. They won’t be early adopters, but I suspect you’ll see some cable companies migrating to G.hn,” he said.

Sigma expects that G.hn products will start hitting the market towards the end of 2011. Stay tuned.

One thought on “G.hn on the Way: Should Make Home Networking Much More Interesting”