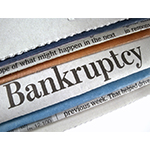 Frontier is planning to file for bankruptcy in mid-March, according to a report published by Bloomberg. The report was based on information provided by unnamed sources who attended a meeting last week between Frontier, creditors and advisors at which the bankruptcy was discussed. The company reportedly wants to negotiate a pre-packaged agreement before March 15, when $356 million in debt payments are due.

A Frontier bankruptcy would not be a big surprise. Rumors that Frontier might make that move have circulated for months, and the company’s decision to hire new CEO Bernie Han late last year was seen as a step in that direction. Han had already been working with the Frontier board’s finance committee and “actively supporting efforts to strengthen the company’s financial position,” according to a press release issued at that time.

Key Frontier investors have organized into at least three different groups and hired law firms and bankers to advise them on a potential Frontier bankruptcy.

Impact of a Frontier Bankruptcy
If a Frontier bankruptcy indeed comes to pass, it would be the second for a major telecom provider in just over one year. Windstream filed for bankruptcy in January 2019. The decision was made after the company lost a court case related to its real estate investment trust spinoff several years earlier, but some financial experts were expecting the bankruptcy to occur even without that trigger.

Windstream and Frontier are alike in that they started out as telephone service providers, and unlike AT&T and Verizon, they do not have wireless businesses to compensate for losses in their traditional landline business. And as bandwidth demands rise, telcos have found it difficult to compete with cable companies for broadband service. CenturyLink would have been in the same situation if not for its merger with competitive carrier Level 3 Communications, which gave CenturyLink a strong position in the enterprise and wholesale market.

Despite its bankruptcy, Windstream has continued to do business as usual, and the same would likely to be true for Frontier as well.

Despite its bankruptcy filing, Windstream was able to participate in and make some major wins in a recent spectrum auction. The company plans to use the spectrum to support fixed wireless service.

The Bloomberg report is available at this link.