Fort Lauderdale, Florida, January 22, 2019, Hotwire Communications, the industry leader in fiber optics and telecommunications services, received independent recognition by PCMag, as the Best Gaming ISP of 2019 in the United States. The results were determined by gathering user submitted data from the PCMag Speed Test tool and ranking ISP’s based on the lowest latency scores and the highest speeds. With over 250,000 tests submitted, Hotwire Communications came in with the lowest average Gaming Quality Index score of 9.5, with the next lowest score being more than double that.

The term latency describes the amount of time it takes between the stimulation and response. In online gaming, low latency can quickly become the most crucial aspect of the game as the delay between starting an action, and the game receiving the command to start can be the difference between complete success and utter failure. With a latency score of 5.8 milliseconds, customers on the Hotwire Communications network can rest assured that their gaming experience will be like no other. 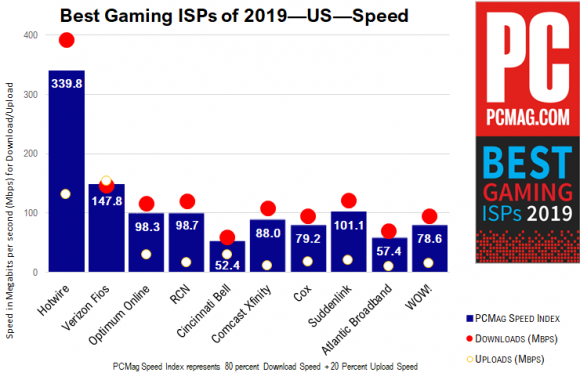 As part of the evaluation, PCMag also considered overall service speeds for customers. With an average speed score of 339.9 Megabits per second, Hotwire Communications again ranked more than twice as much as the next leading competitor, including Verizon FiOS, Comcast Xfinity, or Atlantic Broadband.

“Hotwire takes the award with what is close to the best PCMag Gaming Quality score we have ever recorded (but not quite the best, as you’ll see below),” said Eric Griffith, Features Editor at PCMag. “That said, if you’re lucky enough to live in some of the multi-dwelling units that Hotwire Communications specializes in, that’s the place to set up your big VR rig right out of Ready Player One”