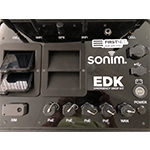 AT&T and FirstNet said they are working on something they call an “Emergency Drop Kit” aimed at enhancing a first responder’s communications capabilities over the FirstNet nationwide mobile broadband public safety network that AT&T is building.

An AT&T spokesperson declined to say when the FirstNet emergency drop kit would be available but did note that the kits are moving from a proof of concept to a reality and that the drop kits will be made into metal briefcases for “easy transport.”

The FirstNet emergency drop kit can be thought of as a 300-foot “connected bubble” that “envelops first responders,” according to an AT&T press release.

The FirstNet Emergency Drop Kit
The metal briefcase into which the FirstNet emergency drop kit will be packaged will measure 19 by 14 by 7 inches and weigh about 25 pounds, the spokesperson said. The kit includes four FirstNet Ready Sonim XP8 rugged smartphones and can be powered by an internal battery for up to 12 hours or plugged into an external power source, she added.

A press release about the FirstNet emergency drop kit notes that the smartphones will come preloaded with FirstNet apps such as Intrepid Response, which is designed to enhance public safety’s situational awareness by plotting each first responder’s live GPS location in the field.

The kit will also include a FirstNet Ready MC400 modem and integrated Wi-Fi to provide a highly secure and reliable data communications hub with intelligent failover to Inmarsat Government satellite service, according to the press release.

The spokesperson was not immediately able to answer a question about how first responders would purchase the devices. But qualified first responders already can sign up for FirstNet service through AT&T stores, so potentially that will be an option for the FirstNet emergency drop kits as well.

“The AT&T FirstNet team is working to meet with every state to properly tailor the program to their distinct needs,” the spokesperson said. “Currently the team is in discussions with several states to integrate the program into their emergency operations plans.”

AT&T and FirstNet will have more details to share on the progress of the program’s implementation throughout the year, the spokesperson commented.

AT&T is the exclusive provider of connectivity on the FirstNet public safety network, which operates in a dedicated spectrum band. Although that network is still being built, AT&T offers first responders priority service on its existing commercial cellular network where connectivity to the FirstNet radio access network is not yet available.

On the flip side, AT&T can put traditional commercial traffic on the FirstNet network when the network is not in use by public safety.

Last month, AT&T said it had turned up 2,500 cell sites on FirstNet spectrum and signed up 1,500 public safety agency customers.