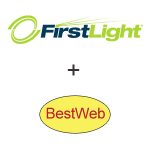 In what’s becoming a common type of transaction for FirstLight, the regional fiber network has signed a definitive agreement to acquire smaller fiber network provider BestWeb.

FirstLight provides fiber-optic data, Internet, data center, cloud and voice services to enterprise and carrier customers in the northeast. The goal of the acquisition of BestWeb, which provides similar services, is to enhance FirstLight’s capabilities in Westchester, Rockland and Putnam counties in the area outside of New York City.

“BestWeb is an ideal match for FirstLight,” said FirstLight President and CEO Kurt Van Wagenen in a press release. “The organizations have worked together for many years, and in fact, BestWeb currently leverages FirstLight’s fiber network to help serve its clients. The acquisition will deepen our fiber footprint in this region by adding approximately 170 route miles of fiber and builds upon our collective success serving K-12 schools under the federal e-rate program.”

The terms of the deal – the fifth FirstLight has announced since it was acquired by Antin Infrastructure Partners in 2018 — were not disclosed in the FirstLight BestWeb deal press release. The transaction, which is expected to close in the fourth quarter of the year, must gain customary regulatory approvals.

FirstLight indeed has been busy during the past year.