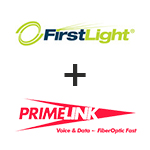 Competitive fiber network operator FirstLight plans to acquire PrimeLink, a subsidiary of  The Champlain Telephone Company, under a definitive agreement signed by the two companies.

The acquisition, if completed, will add assets in the update New York areas of communities in Plattsburgh, Glens Falls, Queensbury, Albany and the Lake Champlain Corridor. There is also connectivity to Montreal Canada.

“I am excited that PrimeLink and FirstLight are joining forces,” PrimeLink CEO Trent Trahan said in a press release. “The companies have a complementary footprint and service portfolio as well as a shared philosophy of offering high quality, locally-based service and support to the communities in which we serve. Now as part of FirstLight, our goal of enhancing the region’s economics and improving the North Country’s quality of life and business climate can be better realized.”

The terms of the deal, which is expected to close during the third quarter, were not disclosed. FirstLight is headquartered in Albany. It provides fiber, Internet, data center and cloud and voice services to almost 9,000 locations in service. More than 30,000 locations are serviceable by its 15,000 route mile network.

FirstLight Primelink Deal
If it closes, the FirstLight Primelink deal will continue an aggressive expansion campaign by FirstLight. In December, the firm acquired ColoSpace, a provider of IT services, cloud services and disaster recovery services in New England. In July, the firm acquired Todd Cable Construction. The acquisition aimed at adding to FirstLight’s ability to expand organically. In May, FirstLight acquired Maine Fiber, which operated a 1,300 route-mile open access dark fiber middle network throughout Maine.

FirstLight did more than acquire companies. In June, the company introduced Veeam-Powered Disaster Recovery as a Service. In May, the company expanded its relationship with the Albany Times Union Center and facilities operator SMG, where the company will provide high speed Internet and voice services. Last January, FirstLight introduced Managed Edge, a combined connectivity and management solution.