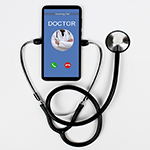 The FCC has adopted a Notice of Proposed Rulemaking (NPRM) on a three-year, $100 million Connected Care Pilot program that will test the idea of providing telehealth services to veterans and low-income patients.

The program would provide an 85% discount on connectivity for broadband-enabled telehealth services. The system would treat a wide array of health issues by connecting users to their doctors.

Issues that the NPRM seeks comment on include budget, duration and the pilot’s structure. Other issues:

The FCC’s intention to release the NPRM initially was announced last month by Commissioner Brendan Carr during a visit to a community health clinic in Laurel Fork, VA. The goal of starting such the Connected Care project and its price tag was initially announced a year ago tomorrow by Carr and Mississippi Senator Roger Wicker.

The benefits of telehealth are so compelling that they predate the broadband age. Patients in rural areas benefit by not having to travel long distances to healthcare facilities and possibly avoid the need to check in to a hospital. Hospitals benefit by reducing the number of people who must be accommodated. In addition to freeing up beds, telehealth teachnology reduces support service requirements such as food service and laundry.

Telehealth is taking off. In April, American Well said that a survey of 800 physician suggests that 22% of doctors have used telehealth and that 61% will use it to see patients by 2022.