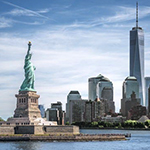 New York City and Salt Lake City will be the sites of the first two FCC Innovation Zones and will support wireless research, the commission announced.

The two initial sites were recommended by the National Science Foundation’s Foundation for Wireless Research. In its proposal NSF said the sites “will enable experimental exploration of robust new wireless devices, communication techniques, networks, systems, and services that will revolutionize the nation’s wireless ecosystem, thereby enhancing broadband connectivity, leveraging the emerging Internet of Things (IoT), and sustaining US leadership and economic competitiveness for decades to come.”

As such the cities will serve as test sites for research on 5G networks as well as for other wireless communications and network studies, according to the FCC.

In addition to the research, parties participating in the research can also conduct unrelated experiments within defined geographic boundaries, though they must also agree not to interfere with incumbent services.

The Innovation Zones extend the geographic in which holders of the already-licensed experimental program licenses can do testing.

Parties must comply with each zone’s FCC-established guidelines, under the zone administrator’s guidance, and provide advanced notice of their projects.

“Few concepts are more central to America than experimentation and innovation.  It’s what we do best,” said FCC Chairman Ajit Pai, in a prepared statement. “So it’s exciting and inspiring to see our Innovation Zones program taking off.  These projects will test new advanced technologies and prototype networks like those that can support 5G technologies. We’re also establishing a process to ensure new innovators can have access to this testing resource while protecting current, licensed users.  I thank all those who are leading these efforts on the ground and stand committed to continuing our efforts to empower innovators.”

In Salt Lake City, the Innovation Zone will support POWDER (A Platform for Open Wireless Data-driven Experimental Research with Massive MIMO Capabilities).  POWDER, which will operate in several connected corridors of Salt Lake City, will be run by the University of Utah and Rice University, in partnership with Salt Lake City.