Home » End of an Era: Android Surpasses Windows as World’s Most Popular OS for Internet Access 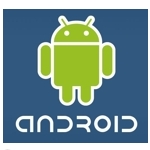 It’s official: the seminal era of personal computing and communications has come to an end as Android has surpassed Windows as the most popular computing device operating system (OS) in the world in terms of overall Internet usage across desktop, laptop and mobile combined, according to StatCounter’s market research unit.

Most Popular OS
“This is a milestone in technology history and the end of an era,” commented Aodhan StatCounter CEO Aodhan Cullen. “It marks the end of Microsoft’s leadership worldwide of the OS market which it has held since the 1980s. It also represents a major breakthrough for Android which held just 2.4% of global internet usage share only five years ago.”

StatCounter’s market data highlights how far and how fast mobile devices have come to be relied on as a primary means of accessing the Internet, as well as the rise of Asian countries as leading drivers of market growth. 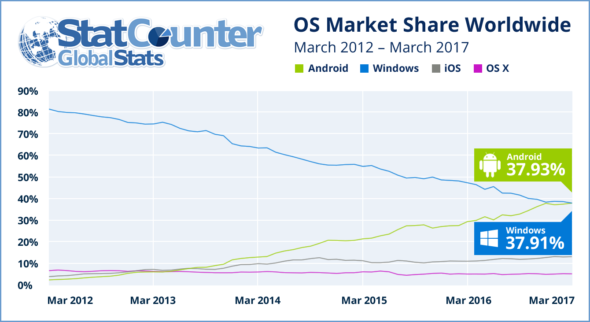 Growing numbers of Americans who do not have home broadband service rely on their smartphones for Internet access, Pew Research Center highlights in recent market research. Twelve percent of those responding to Pew surveys said they were “smartphone dependent” as of year-end 2016. That’s up 4 points since 2013.

Microsoft is Not Done Yet
Microsoft’s Windows still dominates the world of desktop and laptop computer OS, accounting for 84 percent of Internet usage worldwide in March, however.

Moreover, Windows (all versions considered) maintained its leading position across all device platforms in North America and Europe. Windows’ North America March market share came in at 39.5 percent. Running second was iOS at 25.7 percent, followed by Android at 23.6 percent.

“Windows won the desktop war but the battlefield moved on,” Cullen said. “It will be difficult for Microsoft to make inroads in mobile but the next paradigm shift might give it the opportunity to regain dominance. That could be in Augmented Reality, AI, Voice or Continuum (a product that aims to replace a desktop and smartphone with a single Microsoft powered phone).”