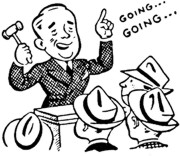 Under a procurement auction, companies ‘bid’ for monies, in this case, stimulus funds, to provide broadband services in a given territory. The thinking is that telecompetitors will compete for the stimulus money by submitting bids to an auction process. The winning bid consists of the company willing to provide the service for the least amount of money. The economists provides this synopsis of their plan:

In procurement auctions for broadband, the government would specify its objective and ask firms to bid for the right to meet that objective. Consider, for example, a rural area with no broadband service. The government can ask firms to bid for a subsidy that would make it profitable for the firm to provide service. Firms and other organizations would compete against each other by bidding down the subsidy they need to offer service. The firm that commits to provide broadband in that area for the smallest subsidy would win the grant.

Recognizing the controversy of procurement auctions and the departure from the status quo that they represent, the proposal suggests performing a ‘trial’ first. “This approach sets up a natural experiment allowing comparison of procurement auctions to the traditional approach. If the experiment is successful, the procurement auction mechanism can be expanded in scope to encompass other regions and stimulus dollars (potentially all remaining stimulus funds).” The proposal suggests breaking the U.S. into six regions, closely following the regional economic area grouping (REAG) system used by the FCC for spectrum auctions. An auction would take place for each region.

The proposal offers a very ‘simplified’ view of the auction process. As is the case with all issues relative to big government programs like this, the devil is in the details. While auctions may introduce some efficiencies, they’re no ‘silver bullet.’ Issues including the regional approach, as well as defining the fair selection criteria for such auctions are no simple tasks. For example, by taking a regional approach like the one suggested, you severely limit the number of companies who can participate. Only companies with considerable scale could take that type of regional approach. We’re skeptical that would solve the problem. You need smaller companies at the grass roots level to realistically address the rural broadband problem. Given the time constraints, coordinating a significant number of smaller companies to respond to a single regional auction seems unlikely. Perhaps such an approach at the state level could make sense, but even then, it would prove difficult

What do you think of the auctions approach? Share your view by using the comments tool below.