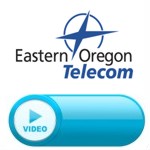 Eastern Oregon Telecom (EOT) is a competitive provider based in Eastern Oregon, serving primarily small town and rural markets. EOT recently embarked on a gigabit fiber program, EOT Velocity Internet, which is building FTTP to select markets throughout their service territory. Telecompetitor sat down with EOT CEO/GM Joe Franell to discuss the unique aspects of the EOT gigabit program.

EOT’s gigabit project will eventually pass about 7,500 homes throughout their service territory. They currently have about 3,000 broadband customers. EOT brings some interesting perspective to the gigabit movement. They are the first U.S. based company to deploy Huawei gear for FTTP. They are also a rural market competitive telecom provider and historically have not secured funding through universal service programs to build or expand their network in rural markets. EOT also has not taken any government grants or loans, according to Franell.

An Interesting Rural Gigabit Case Study
These and other unique factors for EOT make them an interesting gigabit case study. Franell believes that EOT may be on to something that could prove to be a model for bringing gigabit and ultra-broadband applications to smaller rural markets.

“We’ve had to do it the hard way,” says Franell. “If I can build fiber-to-the-home and make it work without any subsidies or government grants or government loan programs, if I can make that work here, if the Eastern Oregon Telecom team can pull that off, it changes the whole fabric of what are we looking for, what are we striving for, what is the business model for fiber-to-the-home in rural markets in the United States and what’s the government’s role in that.”

Planning for Competitive Response
EOT worked hard to keep their gigabit plans quiet so as to not wake up their incumbent competitors, who include CenturyLink and Charter. They began beta testing gigabit about a year ago, but only recently opened up about their plans.

Franell says he expects competitors to offer lower cost options, but says he’s not too worried because he prefers not to compete on price anyway.

Why Gigabit Fiber in Rural Markets?
For EOT and Franell, offering gigabit and other ultra-broadband applications is all about making their market attractive for not just businesses, but for young people. Young people leave rural communities to go to college or for other reasons, and Franell sees gigabit as a reason for them to come back. He also sees fiber based ultra-broadband as leveling the playing field in terms of attracting new people and businesses to move to Hermiston, Oregon.

“I don’t know many really bright young people who are willing to move back to a small community unless they can be connected,” says Franell. “So having really, actually better than most metropolitan areas, Hermiston, when we finish this, is going to have better than most places in the United States…so you can have the quality of life of living in a rural community.”

2 thoughts on “Eastern Oregon Telecom: A Model for Rural Gigabit?”