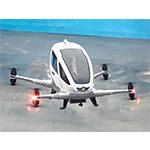 Citing an emerging ‘low airspace digitized economy,’ Huawei this week unveiled their Digital Sky initiative during their Global Mobile Broadband Forum (MBBF), taking place this week in London. Drones are taking on an increasing role in the digital economy and the global communications conglomerate sees an opening to help communications carriers seize on it.

Beyond current hobbyist drone usage, there are emerging diverse business cases for extensive drone usage. Applications for transportation, agriculture, infrastructure, public safety, and entertainment, among others, are at the beginning stages. These drone applications will require real-time wireless broadband connectivity, and that’s where Huawei’s Digital Sky initiative comes in.

Citing the need for ubiquitous broadband coverage for up to 300 meters (roughly 1,000 feet) in altitude, Huawei wants to foster a new low airspace ecosystem focused on drones. Current networks can only support altitudes of 120 meters (roughly 400 feet), according to Huawei.

“The combination of drones and cellular networks will redefine the airspace, transforming the way we travel, shop, and create,” said Zhou Yuefeng, CMO of Huawei’s Wireless Network Product Line in a press release. “However, all current base stations are designed to serve humans and objects on the ground. The current network can only support a limited number of drone applications where aircraft fly below 120 m.”

Drone recharging as a service would empower wireless carriers (or tower operators) to utilize wireless towers for drone recharging stations. Platforms could be placed on towers, allowing drones to land and automatically recharge their batteries, using technology similar to wireless charging pads used for today’s smartphones.

MBBF also highlighted more advanced drone applications, including the concept of flying taxis. A remote demo, taking place in China, highlighted a drone taxi application, where an EHANG 184 flying taxi was remotely controlled via a non-line of sight (NLOS) 4.5G wireless connection. These flying drones are being positioned as a key application for 5G, thanks to its lower latency and high throughput capabilities.

Huawei’s Digital Sky initiative, which is a part of their Wireless X Labs division, has three defined steps:

A Digital Sky hub, or drone application demo site, has been formed in Shanghai, China. Digital Sky aims to launch several other hubs in Europe, Canada, and Korea in 2018.