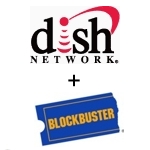 DBS  provider DISH Network is aiming to seize on Netflix’s recent troubles with the launch of Blockbuster Movie Pass, which they claim is “the first Pay-TV service of its kind.” With the move, DISH is consolidating disc by mail, streaming services, and game discs by mail, into a single service and including it as a bundled offer to their traditional subscription video service. There is a bit of shaking up going on here.

“This programming package is unmatched by any other cable, satellite, telco or online streaming movie service,” DISH touts in a news release.

Three months of Blockbuster Movie Pass access is also included for new DISH Network customers who subscribe to the America’s Top 120 programming package. New subscribers choosing this option will then have to pay for the movie streaming service, with packages starting at $10 per month.

“We’ve created a package that combines the best assets of the movie entertainment and video gaming industries with the convenience and integration provided by a multichannel video provider,” said Michael Kelly, president of Blockbuster. “Blockbuster Movie Pass is the ultimate programming package for every movie buff. The combination of DVDs by mail and unlimited in-store exchanges provides more than 100 million people living near Blockbuster stores, which are open 7 days a week, immediate satisfaction and unmatched choice.”

The offer is quite competitive to Netflix and addresses the concerns many have expressed regarding Netflix’s recent split of DVD-by-mail and streaming services. But in addition, by bundling Blockbuster Movie Pass with existing subscription packages, DISH is also attempting to create competitive advantage over traditional video service provider offers, including DirecTV, Comcast, and others. Will the market respond in kind?