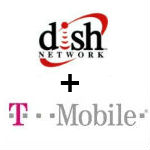 DISH Networks has amassed a war chest of wireless spectrum over the past few years, leading to intense speculation about their wireless intentions. We may have a little more clarity about those intentions. The Wall Street Journal is reporting that DISH and T-Mobile are in advanced merger discussions. If it comes together, it represents yet another major deal in an increasingly mega-merger atmosphere.

A deal is not imminent, and it may fall apart, but the framework for a deal is in place, according to the WSJ article. Current DISH chairman Charlie Ergen would assume the role of chairman in a merged company. Current T-Mobile CEO John Legere would assume the CEO title of the merged company. Both companies have similar market caps, with DISH at about $33 billion, and T-Mobile at $31 billion. DISH has close to 14 million TV subscribers and over 500K broadband subscribers. T-Mobile has close to 45 million wireless subscribers.

DISH and T-Mobile Merger
DISH is the second largest satellite based pay-TV provider and T-Mobile is the third or fourth largest wireless provider, depending on which subscriber numbers you believe. Sprint argues they are still number three, but if T-Mobile hasn’t passed them yet, they soon will by most accounts.

Combining DISH and T-Mobile would create a wireless and video powerhouse. DISH has already begun exploring alternative ways of delivering video through their Sling TV effort, which streams linear channels and on-demand content over the Internet to a variety of devices, including smartphones and tablets.

DISH’s wireless spectrum assets would be particularly attractive to T-Mobile, who is busily trying to catch up to market leaders Verizon and AT&T with a 4G LTE mobile broadband network. DISH assets would go a long way in helping that effort and also would present interesting mobile TV opportunities, which appears to be a competitive necessity going forward.

AT&T is on a similar course with their pending acquisition of DirecTV, which would also provide interesting mobile TV opportunities. DirecTV lacks wireless spectrum that can be used for mobile offerings though. Verizon of course is building their own mobile TV effort through a series of smaller acquisitions, including AOL most recently. The mobile TV race is indeed very much on.

For DISH, the move is also very appropriate, given the declining satellite pay-TV business. The future is in mobile and broadband, not pay-TV. By merging with T-Mobile, DISH sets itself up to be a player in this future.

Merger Mania
If the merger negotiations ultimately result in a deal, it will join a growing number of mega-mergers. These include AT&T-DirecTV, Charter-TW Cable-Bright House, and Altice-Suddenlink. Analysts predict more major deals to come, as the technology and media sectors look to beef up and battle each other.

One would have to think Sprint is looking around, or perhaps being looked at. They seem to be on the outside looking in, with regards to building more scale and a serious mobile TV effort. New owner Softbank is a global dealmaker though, so I suspect Sprint will be in play in some fashion as well. There are many existing cable companies looking for a wireless play. Stay tuned.