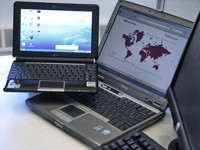 Subsidizing cell phones in return for lengthy contracts has been the norm for many years now. It’s created healthy returns for mobile carriers. Now, that model looks to be expanding. AT&T is now subsidizing netbooks, which are smaller notebook computers designed to be mobile Internet devices, rather than powerful computers. In addition to Wi-Fi, netbooks use 3G mobile broadband, which is the fastest growing business line in wireless. “The economics for us are terrific. We’re willing to invest to get a customer,” said Glenn Lurie, AT&T’s president of emerging devices to Investor’s Business Daily. “We’re very comfortable with the margins we’re going to receive on these netbooks, in the deals we’re talking about.” AT&T currently offers both Dell and Acer Netbooks for $99 with a two year mobile broadband contract.

But why stop with smartphones and netbooks? AT&T says they’re looking towards possibly subsidizing cameras, portable video games, or any device with a chip and the need for data transfer. DSL and cable modems have also historically been subsidized. Should IPTV carriers subsidize HDTVs and DVRs, or does subsidization only work for wireless enabled devices? Share your opinion by using the comments tool below.