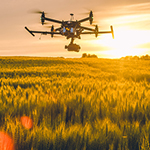 Most Americans are comfortable with drones becoming commonplace, according to new research about consumer attitudes toward drones from the Consumer Technology Association (CTA).

The study shows that a little more than three-in-four (76%) of U.S. adults are unfazed by drone use by local law enforcement, and nearly the same amount are comfortable with drone use by utility and construction companies (71%) and educational institutions (70%).

Hobbyists are even more comfortable with drones, the report says. Seventeen-in-20 (86%) of drone owners support any adult flying a drone for general purposes. Today, 13% of U.S. households – some 15.6 million U.S. households – own a drone, up from 10% in 2018. Another 12% of households plan to buy a drone in the next year.

The research adds that nearly all (99%) drone owners use their devices for recreational uses including general purpose flying (72%), amateur aerial photography and videography (55%), and racing (23%). Small- (59%) and medium-sized (58%) drones are most common, and most owners have more than one device.

“Drones are making work safer and more efficient for professions such as newsgathering, construction, utility inspections and first responders,” said Steven Hummel, CTA senior research analyst, market research, in a prepared statement. “At the same time, innovations in technology have made drones more accessible for consumers with enhanced features that can turn anyone into a hobbyist or indoor racing enthusiast. The possibilities of drones are limitless.”

Among the other CTS findings: