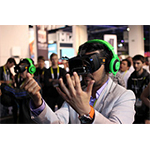 Augmented reality (AR) and virtual reality (VR) technologies are expected to see record growth this year, according to the Consumer Technology Association (CTA). The forthcoming U.S. Consumer Technology Sales and Forecasts report from CTA projects AR/VR headset sales (including eyewear) eyewear will sell 4.9 million units in the U.S. in 2018 (a more than 25 percent increase from 2017).

“We’re thrilled with the impressive growth of AR/VR, reflecting that the sky is the limit with these emerging technologies,” said Karen Chupka, CTA senior vice president, CES and corporate business strategy, in a prepared statement.

“It’s up to us in the industry to help consumers understand all the technology and content available right now in the AR/VR/MR space,” added Mark Turner, Technicolor vice president, corporate partnerships and strategy, and chairman of CTA’s AR/VR working group, in a prepared statement. “The investments we’re seeing in these immersive technologies, coupled with other innovations – like wearables and voice search – point to an exciting future of truly pervasive personal computing. A future where your physical environment can morph between being your digital workplace and your digital fun place.”

Some of the latest of these technologies with be on display at CES® 2018 next week in Las Vegas, Nev.