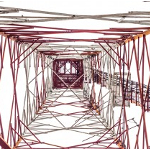 As mobile data usage continues to skyrocket and as the amount of unused spectrum that is ideally suited for fixed and mobile wireless service dwindles, the telecom industry will need to find new ways of maximizing existing resources. With that in mind, there is some promising research from Rice University suggesting that it could be possible for wireless data service to share UHF spectrum with TV broadcasters also using the same frequencies.

Already some broadband wireless providers are offering fixed service using broadcast television spectrum in areas where certain channels are not used by broadcasters, spectrum known as “TV white spaces.” White spaces technology designed to use vacant TV channels to support nomadic broadband wireless similar to Wi-Fi also is under development. Rice researchers took these ideas a step further by using spectrum bands corresponding with in-service UHF channels. The technology potentially could be useful in urban areas where many UHF channels are in use by broadcasters.

Key to the sharing capability is what the researchers call WATCH technology, for “wi-fi in active TV channels.” According to a Rice University press release, WATCH could provide at least six times more wireless data bandwidth in comparison with traditional white spaces technology.

Wireless Data and TV Broadcasts
WATCH technology is designed to prevent TV broadcasts from interfering with data transmissions and vice-versa. According to the researchers, it achieves this through two processes.

One process monitors TV broadcasts on a channel and uses sophisticated signal-canceling techniques to insert wireless data transmissions into the same channels.

The other process would require TVs to report when they are tuned to a UHF channel. To enable this capability, one of the Rice researchers constructed a smart remote control app that reported whenever a test television in the lab was tuned to a UHF channel so that the WATCH system could automatically shift to another part of the UHF spectrum that wasn’t being used. As an alternative to a smart remote control app, a smart TV also could provide the required functionality, researchers said.

The researchers did not immediately respond to an inquiry from Telecompetitor requesting additional information. But it would appear that in order for WATCH to be commercially viable, all TVs in the U.S. capable of receiving over-the-air signals would either require smart remotes or would need to be smart TVs – a situation not unlike what occurred when the country converted to digital television broadcasting in 2009 and consumers with older television sets received a voucher to cover some of the costs of purchasing a converter box. That was no small undertaking, but depending how extreme the nation’s spectrum shortage becomes, it might be worth considering a similar undertaking to support WATCH technology.