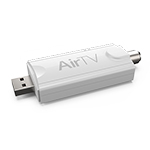 A new OTT set-top-box, the AirTV is now on sale, and it promises to introduce a compelling option for interested pay-TV cord cutters. The new DISH/Sling featured digital media player STB runs on Android and creates interesting competition for Roku, Apple TV, and other OTT focused media players.

Perhaps the most compelling feature for the $99 AirTV player is the clean integration of local broadcast channels into the programming interface. Local channels are delivered via an OTA antenna that must be connected to the AirTV platform via an AirTV HDMI adapter. AirTV is offering a player/adapter bundle for $129 with a $50 Sling TV credit, available online for now.

AirTV is also “optimized” for Sling TV, providing an integrated skinny bundle of cable channels as well, including CNN, ESPN, HBO and others. The platform also has Netflix and Google Play integrated into its interface, allowing access to popular OTT content. Roku and Apple TV can’t match the integration of local and OTT on a single interface straight out of the box, at least not without some third party help.

Additional features of the AirTV platform include:

Threat to Retransmission Regime?
The AirTV website heavily promotes cord cutting, with specific emphasis on the ability to get local channels without a pay-TV subscription. Any AirTV subscriber who opts for the local broadcast option is a potential loss of monthly revenue to not only broadcasters (through retransmission fees), but also the traditional pay-TV operators who carry them. Should it (and its sure to be coming competitors) gain some traction, it could prove to be a threat to a retransmission consent revenue stream that now counts in the billions.

Challenges do remain though and pay-TV providers still have some tricks up their sleeve to compete. The AirTV platform has no DVR option (at least for now). There is also no easily integrated TV Everywhere or mobile option. Local channels through OTA antennas are not accessible everywhere either.

AirTV recommends at least 3 Mbps broadband for SD viewing and 5 Mbps for HD. No recommendation for 4K content via OTT was offered. Expect more news and hype about AirTV at this week’s CES show.

One thought on “Cord Cutter’s Dream? AirTV is Now on Sale, Integrates Locals, Sling, and Netflix”