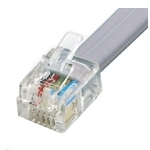 With broadband front and center these days, thanks in large part to policy debates surrounding a national broadband plan and the regulations that will govern it, one method of transmission that get’s the least amount of respect these days is DSL. It’s not as sexy as FTTH and 4G wireless, and quite frankly, cable modem broadband appears to be favored by the broadband buying public over the past year, at least in larger markets.

But there’s no denying that DSL is still the workhorse of telco broadband and will be for many years, maybe even decades, to come. It’s not just small rural telcos that depend on DSL as their main broadband option, its companies with global reach like AT&T and Qwest as well. Tier 2 providers like CenturyLink, TDS, FairPoint, and Frontier also have huge copper/DSL infrastructure to contend with. I fully admit that all things being equal, FTTH is the better option, and when possible, should be selected over DSL. I also fully admit that, generally speaking, a Mercedes is better than a Toyota (especially these days).  But everyone can’t afford (or necessarily needs) a Mercedes.

Despite all the rhetoric and desire to get FTTH to every home in America, to be blunt, it ‘ain’t gonna happen.’ It’s just simply too expensive, and for a nation that continually runs a structural deficit, there are probably other priorities to consider first. I chuckle at analysts and reporters who can’t understand why every service provider doesn’t just buckle down and do FTTH to their entire footprint. That’s easy to say when you don’t have to worry about bankrupting your company in the process. The reality is, DSL is here to stay and prolonging its life is paramount.

To that end, there’s a lot of recent activity afoot. We’ve already explored past lab experiments by both Alcatel-Lucent and Ericsson that significantly increase bandwidth speeds for DSL. As BroadbandReports.com outlines, there’s been some recent chatter about AT&T exploring the capability of offering 80 Mb/s over their DSL footprint.

Heavy Reading analyst Graham Finnie outlines some of the technologies being used to achieve these faster speeds, including copper pair vectoring and DSL phantom mode. These are not silver bullet solutions and they have their challenges. For one, they involve bonding, which requires at least two available copper pairs. Additionally, there’s that pesky issue of distance, or lack thereof, which more acutely impacts rural carriers.

But there is activity and recognition that DSL and copper will continue to play a critical role in achieving universal broadband. Even a recent FCC report suggests DSL, not FTTH, is the answer to get broadband more widely deployed. All this activity leads me to believe there is an ongoing renaissance for DSL and copper facilities – one that is welcomed by many.