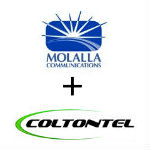 Some people believe that programs such as the high-cost Universal Service fund, the broadband stimulus program and Rural Utilities Service grant and loan programs have insulated small telcos from market realities that have driven consolidation in the broader telecom market—and proponents of this belief argue that small telcos could find themselves facing some harsh realities in the future, depending what reforms are made to some of these programs.

One small telco that isn’t waiting around to find out if such predictions will come true is Oregon-based Molalla Communications Cooperative (MCC). Recently the company approached Colton Telephone & Cable TV, a neighboring telecom cooperative, about the possibility of combining operations to create a joint venture focused on a broadband-centric future.

“We believe with the changes that are coming with the FCC and the continued decline of landline [voice] that broadband is the future,” said Christine Cline, community and workforce relations manager for Molalla Communications, in an interview with Telecompetitor.

But Colton Telephone’s board of directors was not interested in the idea. “Their specific words were that they wanted to ‘weather the storm,’” Cline said. She added, however, that, “We do not believe the storm is ever going to end. National trends show that a review of services needs to continue to be done to remain viable.”

Undaunted, in what could be characterized as a cooperative ‘hostile takeover’ strategy, MCC is now taking its ideas directly to Colton Telephone cooperative members. MCC has invited Colton members to attend MCC’s annual meeting on July 30. The goal, Cline said, is to see how many Colton members attend and express interest in MCC’s ideas. If sufficient interest exists, next steps could result in Colton members taking a proposal to their board, encouraging or maybe pushing them towards some form of business transaction with Molalla.

MCC is open to various options moving forward, Cline said—including some form of combining operations that would eliminate duplicate services, instead focusing on the services offered by whichever of the two companies has the best offering. In at least one area, MCC already has what appears to be a superior offering.

In a letter inviting Colton members to the MCC annual meeting, MCC notes that it offers “a minimum of 6 Mb/s and up to 20 Mb/s for only $41.95per month compared with Colton Telephone’s 1.5 Mb/s priced at $44.95.” MCC also has plans to bring fiber-to-the –premises to 75% of its exchange and is considering adding services such as mobile communications and video. MCC has about 4700 members and Colton Telephone has between 800 and 1200 members, Cline said.

In addition, Cline said, “We have been successful with economies of scale and managing finances to keep overhead costs low.” The concept of small telcos coming together to share resources is nothing new, although it may be gaining some momentum. Synergy Technology Partners of Tennessee is a joint venture between West Kentucky Telephone Cooperative and Ben Lomand Telephone Cooperative, formed to acquire and/or manage multiple rural phone companies including Ardmore Telephone of Tennessee and Alabama. There are other joint management arrangements between rural telcos as well.

The changing market environment is causing small telcos to evaluate all options, and consolidation, through traditional mergers, or otherwise as in the case of Molalla – Colton, looks to be increasingly on the table.