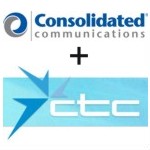 The acquisition will add a 275 route-mile fiber network, over 300 lit buildings, and an existing customer base of 1,500 businesses to Consolidated Communications. CTC began as a PBX dealer in 1984 and has grown into a provider of Internet, voice, metro Ethernet, and hosted VoIP services with approximately $10 million in revenue.

“Consolidated Communications’ network already extends to Champaign, Ill., so this deal allows us to add a robust fiber network including 275 fiber route miles to our long haul network and opens up opportunities to the business market,” a Consolidated spokesperson tells Telecompetitor in an emailed statement. “Once the two networks connect, there will undoubtedly be benefits for CTC customers.”

Consolidated says no branding decisions have been made and they will evaluate whether CTC will continue to operate under its own name after closing. The deal is an all cash transaction valued at $13 million and closing is subject to regulatory approvals. It’s expected to close in the second or third quarter of 2016.

The move adds to a long list of acquisitions by Consolidated, which now operates in 11 states. Past acquisitions have included Enventis/Hickory Tech and SureWest.

“Our history shows an active M&A pattern, and we’ve previously communicated an interest in acquisitions that are additive to our strategy,” said the Consolidated spokesperson. “This acquisition is a great example of our strategy being executed.”

It’s a strategy Consolidated CEO Bob Udell echoed at an investor conference in 2015, where he noted it was desirable for future acquisitions to be fiber rich and “contiguous” to Consolidated’s footprint.