You know the competitive landscape is quite mature when competitors resort to blimps. That’s just what’s happening between DirecTV and its central Florida cable competitors. It all revolves around the cantankerous issue of the NFL Network. The NFL Network is battling cable companies to get carriage on their basic tiers. Many cable companies are resisting, and putting NFL Network on a digital or “sports” tier. Others, including Time Warner Cable don’t offer NFL Network at all. As a result, millions of cable subscribers can’t watch NFL Games on the NFL Network. DirectTV, Verizon FiOS, and other cable competitors are seizing on this issue to build competitive advantage, by offering NFL Network on less restrictive tiers. DirecTV is trying to exploit this advantage, thus the blimp.

DirecTV will be flying their Starship blimp over the Tampa/St. Petersburg market during tonight’s Denver Broncos/Houston Texans game, and displaying the actual game on the blimp’s 2,100-square foot video display. People from the ground will be able to watch the actual game on the blimp. DirecTV is taking aim at Brighthouse Networks, the local cable MSO, which does not carry NFL Network. DirecTV will continue the blimp tactic across central Florida, including Orlando, for the next few NFL Network game broadcasts. There is no end in sight for this dispute. Even Senator John Kerry has offered to try to mediate. I guess our nation’s many problems will need to take a back seat as the Senator resolves the ultra important issue of who gets to watch the game tonight.

Behind the Renaming Trend: A Broadband Brand Scorecard 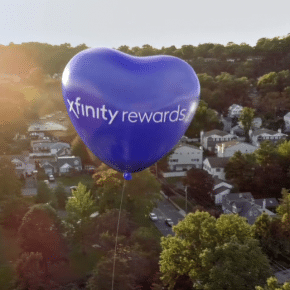