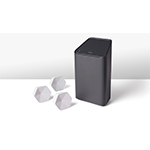 Comcast is rolling out WiFi extenders called xFi Pods in Boston and Chicago in anticipation of a national launch in 2018. Comcast xFi Pods aim to extend reach of the MSO’s Xfinity WiFi service to every nook and cranny of the premises.

The approach features a mesh architecture in which no networked element is dependent upon a single connection. The company compares the footprint of the devices, which are hexagonal and fit into electrical outlets, to plug-in air fresheners.

Comcast xFi Pods
Comcast says that many homes don’t need xFi Pods. “Our xFi Gateways deliver reliably fast speeds and the best WiFi coverage to the vast majority of households,” wrote Eric Schaefer, SVP and General Manager of Communications, Data and Mobility Services in Internet in a blog post. “However, there are homes that have unique WiFi challenges due to their size, shape, age, or construction materials. That’s where xFi Pods come in.”

The company suggests that people check the reach of their xFi Gateway before ordering xFi Pods and provides advice on optimal placement. The xFi Pods come in three- and six-pod packs. The three pack is recommended for homes with three or four bedrooms and the six pod for those with five or more bedrooms.

One of the biggest expenditures for broadband companies is truck rolls. It stands to reason that they would make every effort to empower subscribers to tackle WiFi coverage issues themselves. This makes the xFi Pod concept a sensible one, even if some people will use it despite the fact that their xFi Gateway probably would suffice if repositioned.

Last week, Comcast said that its xFi gateway now is available in all 26 markets that have Xfinity Gigabit Internet. The gateway has reached speeds of 1.5 Gbps in the lab due to its 160 MHz channels, combination of IoT radios and Multi-user, Multi-input, Multi-output (Mu-MiMo) technology.