Home » Comcast: X1 Will Win the Day for Us Even Against OTT 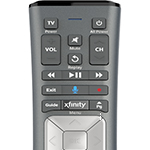 We lost track of how many times Comcast’s new CEO Dave Watson touted the company’s X1 user interface at an investor conference today. But it was in the range of a dozen times or more. Among the X1 competitive benefits cited: reducing churn, improving customers’ image of the company, positioning the company to compete with cable-like over-the-top video offerings and others.

“We think of it as an operating system,” said Watson of X1. Watson also described the interface as “an aggregator of aggregators.”

The descriptions reference the device’s ability to serve as a single point of control for multiple types of video, including the company’s own cable content as well as OTT offerings from the likes of Netflix and in the future, YouTube.

Customers also can use voice commands to search for content or recommendations using X1’s voice-enabled remote control, Watson noted. “Once you experience it, it’s just great,” he said.

X1 Competitive Benefits
Just over half (52%) of Comcast subscribers currently have an X1 user interface, Watson said. Among the X1 competitive benefits that Comcast has experienced, Watson cited:

Streaming TV
Comcast recently revealed a streaming TV service, dubbed Xfinity Instant TV, that offers a portion of its traditional channel lineup for people within the company’s cable TV footprint. Content is delivered over a managed IP network to mobile devices or to Samsung Smart TVs or Roku media players.

“We love that opportunity in footprint,” commented Watson.

The company has no plans to take that offering nationwide, however, Watson said. If the company were to purchase nationwide content rights, the offering would make little or no profit, he explained.

“We will compete when they come into our footprint aggressively with X1 and broadband,” he said.

Watson made his comments at the MoffettNathanson Media & Communications Summit, which was also webcast.

One thought on “Comcast: X1 Will Win the Day for Us Even Against OTT”