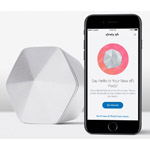 Comcast xFi pods connect with xFi gateways, and are powered by a cloud-based, remote management platform. Comcast says the platform is self-monitoring, constantly evaluating the current Wi-Fi environment for the best Wi-Fi performance, and can self ‘heal’ for optimal performance.

“Our gateway devices are incredibly powerful, but we know that some homes have a unique layout or are constructed of materials that can disrupt WiFi coverage in some rooms,” said Eric Schaefer, Senior Vice President and General Manager, Broadband, Automation and Communications, Comcast Cable in a press release. “WiFi is the oxygen for the digital home and our xFi Pods can blanket a home with great coverage and are simple to install and easy to use.”

Comcast has partnered with Plume for the xFi pod platform, in what amounts to somewhat of a resale deal. Customers can go direct to Plume for the same technology, but Comcast has simplified the setup for their xFi platform.

Comcast will sell xFi pods in a 3-pack for $119 or a 6-pack for $199. Later this year, Comcast will introduce a monthly payment plan for xFi pod purchases. xFi pods must interact with Comcast’s latest xFi gateway.

The move highlights an ongoing strategy by Comcast to ‘own the digital home,’ with high quality Wi-Fi seen as a broadband differentiator. They have plenty of competition, not only from competing broadband carriers, but also from direct-to-consumer plays for better Wi-Fi from companies like Google, eero, and even their current partner Plume.