Comcast said today that it is conducting what it believes to be the first end-to-end deployment of hollowcore fiber by an internet provider. Hollowcore fiber has air-filled channels, enabling it to support faster speeds and lower latency in comparison with traditional fiber, explained Elad Nafshi, executive vice president and chief network officer at Comcast Cable, in an interview with Telecompetitor.

“What it enables you to do is it doubles the reach for latency-critical applications,” he added.

The Comcast trial interconnects two locations in Philadelphia in what the company calls a “hybrid” deployment that also includes traditional fiber.

The hollowcore fiber, from Lumenisity, is designed to be backwards-compatible with conventional fiber, said Nafshi, also noting that Comcast expects to have multiple suppliers for hollowcore fiber.

“We will continue to work with our partners,” he said.

Asked whether hollowcore is likely to play a role in the last-mile connection to the customer, Nafshi said the company will be “evaluating optionality.”

It will be interesting to see if hollowcore fiber catches on in financial markets, considering that some network operators have gone so far as to establish new routes between cities like New York and Chicago to cut some miles, and a few split seconds, of latency off of fiber connections to enable transactions to be completed every-so-slightly faster.

When we asked Nafshi about that, he said that could be one use case for the new fiber. He also pointed to high-quality video as another latency-sensitive use case.

Meta, the company formerly known as Facebook, has cited lower latency as a key development area to enable virtual and augmented reality applications.

Nafshi declined to answer a question about how the cost of hollowcore fiber compares with traditional fiber. 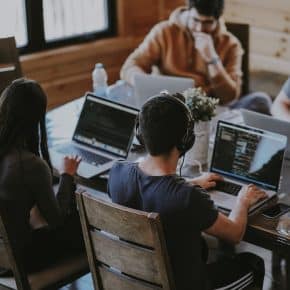