Home » Comcast is Latest to Come out with Wireline Smartphone – HomePoint 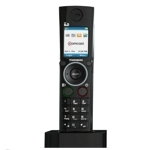 Wireline smartphones are home phones that attempt to add a variety of broadband enabled features and functions to traditional plain old telephone service (POTS). These services take a page from wireless smartphones, which are increasingly seen as all encompassing communications devices. The iPhone is probably the best example of the new role of wireless smartphones.

Companies, both telco and cable, that depend on wireline telephone service for revenue are trying to catch up with wireless in this  smartphone regard, with mixed success. They’re hoping that consumers find enough value in these feature laden home phones to keep home telephone service active and not go wireless only. BroadbandReports.com points our attention to the latest effort from Comcast – HomePoint. Comcast says “HomePoint will change the way you think about the home phone.”

HomePoint allows Comcast home telephone subscribers to access email, a universal address book, as well as view news, sports, and weather data from a DECT 6.0 cordless handset. The service also features visual voicemail. The handsets feature both Ethernet and Wi-Fi connectivity, and the handset base can act as a cable modem and router for home networking functionality.

This is not the first wireline smartphone initiative. The trend has seen mixed success. Verizon recently discontinued their version, the Hub. AT&T’s version is called Home Manager. Other’s including Embarq (CenturyLink) and Cincinnati Bell have similar versions.

Bottom line – these service providers are all experimenting with ways to extend the life on home phone service, with no real clear path on how to do so. Other strategies include what Verizon and AT&T are doing with their new VoIP services, U-Verse Voice and Verizon Digital Voice, which are also feature laden, but don’t tie the service to an expensive handset.

Price of handset is one obstacle to these services. It’s what I think killed the Hub. It was priced at or above $200, which is too high. No word yet on pricing for HomePoint. Perhaps these carriers should also adopt the handset subsidization model, since they’re looking to mimic the wireless experience.