Home » Comcast Home Control Will Be Router-Centric with Curated Devices 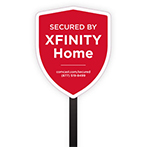 Comcast has seen a sharp increase in consumer interest in home control over the last six to 10 months and expects the market to double over the next 12 months, said Daniel Herscovici, senior vice president and general manager of Comcast’s Xfinity Home unit yesterday. The Comcast home control strategy aims to maximize that opportunity by offering an “end-to-end solution” with mass market appeal, Herscovici said – and that means a router-centric approach with professionally installed curated devices that Comcast will support.

Herscovici made his comments at Parks Associates CONNECTIONS conference this week, which was also webcast.

Comcast Home Control
The current Comcast home control offering, dubbed Xfinity Home Control, lets end users pick and choose from a range of capabilities including 24/7 professional monitoring, the ability to remotely control the system using a smartphone, the ability to add cameras and others.

Three-quarters of net new Comcast home control subscribers are new to the category, according to Herscovici. “We believe we’re driving new [people] to security because of” the experiences that the Comcast offering can support, Herscovici said. He noted, for example, that the system provides peace of mind by enabling homeowners to check in on a family member.

Moving forward, however, Herscovici expects to see upgrades from “legacy systems” comprising a growing share of Xfinity Home Control sales. Although he didn’t detail what he meant by “legacy system,” it likely was a reference to traditional alarm systems, particularly those lacking capabilities such as remote smart phone control.

Herscovici estimated that 75% to 80% of homes with home security systems today are still on legacy systems.

An End-to-End Solution
Interest in upgrading home security systems is likely driven, at least in part, by new devices that have come onto the market to work with these systems. Herscovici noted, for example, that 40% of people are asking about video cameras and 26% are asking about connected doorbells.

Often each of these devices has its own app, however, which means that consumers eventually reach what Herscovici called “vertical rebellion.”

Although some manufacturers have created platforms that can manage multiple devices in a consistent manner, those platforms are not perceived as sexy or useful, Herscovici said. Consumers also balk at paying $250 or so for a device that has the platform built in.

As an alternative, Comcast’s strategy is to use a broadband home’s existing router or gateway as a platform for a range of home control devices. About 70% of U.S. households have broadband and a WiFi router, according to Herscovici.

“There is a lot of intelligence and processing power in that device that’s sitting in customer homes right now,” he said. He added that some routers also have Bluetooth capability and in the future might also support communications via Zigbee or Z-wave.

Herscovici called the router a “frictionless” device because it is already in so many homes.

Consumers need more than just the router, however, Herscovici said. In addition, he said, “consumers are looking for someone to recommend to them what camera to use.” That, he said, is what Comcast’s “curated devices” program offers.

The company’s strategy is to test a range of devices and to settle on a few in each product category to support. That support will include Comcast helping customers with devices that are on the curated list.

The Comcast home control strategy also calls for professional installation. The goal, according to Herscovici, is for Comcast to provide a single point of contact for all matters involving the home control systems.

Alternatives to WiFi
It’s worth noting that the mainstream home security and control industry views WiFi connectivity as overkill for many types of home control connectivity requirements. While cameras require WiFi’s bandwidth, many other devices do not – and technologies such as Z-wave and Zigbee can provide the required bandwidth at lower cost and with lower power requirements.

It has become increasingly commonplace for home security system control panels to include Z-wave connectivity to support connectivity to devices such as door locks and lighting controls. Those, of course, are the sorts of un-sexy platforms that Herscovici denigrated. But it will be important not to underestimate the competitiveness of those platforms – at least until we start seeing more routers with Z-wave or Zigbee connectivity, as Herscovici predicts we will.

It will also be important to keep an eye on emerging home control standards such as Thread that backers are touting as superior to Z-wave and Zigbee – and, for home control purposes, possibly superior to WiFi as well.