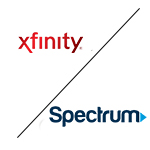 Comcast and Charter announced a joint venture today that will fuel both cable MSOs’ continued move into the mobile broadband ecosystem. The partnership will focus on developing and operating backend systems that support both Xfinity Mobile and Spectrum Mobile, signaling a more committed effort for cable MSO-based mobile offerings.

Each company will continue to operate their own mobile brands and their own customer-facing sales and marketing operations. This partnership will focus on the backend and develop customer sales and support platforms, device logistics and warehousing, and billing, the companies announced.

Comcast launched Xfinity Mobile in 2017 and had amassed 380K subscribers by the end of 2017. Spectrum Mobile has not yet been launched, but Charter Chief Mobile Officer Danny Bowman says the service, which is patterned after Xfinity Mobile, will launch in the “[c]oming months.”

The operating partnership will leverage much of what Comcast has already developed for Xfinity Mobile. In fact, that past development is the primary investment Comcast will use for the 50/50 partnership. Charter will fund the joint venture as their contribution, according to a press release.

“We have built a best-in-class mobile platform for Xfinity Mobile that is resonating with customers,” said Sam Schwartz, Chief Business Development Officer for Comcast in the press release. “By collaborating with Charter, we will help drive operational and cost efficiencies for both companies.”

Comcast and Charter Mobile Strategy
Both companies leverage access to Verizon spectrum, operating in a hybrid-MVNO model. Primary coverage is provided through Wi-Fi access, for both voice and data. When quality Wi-Fi is unavailable, Xfinity and Spectrum mobile customers revert to Verizon coverage.

The move highlights a continued push into the mobile broadband arena for the cable industry. By combining forces, the two largest cable MSOs bring considerable resources to the party and could prove to be a major force in the highly competitive mobile industry. Although nothing is guaranteed. High profile mobile inroads by the cable industry have been tried before, with very limited success.

The partnership will be governed by a four-person board, with each company gaining two board seats (makes you wonder who has tie-breaking power?). The new business unit will be based in Philadelphia, utilizing primarily Comcast employees.