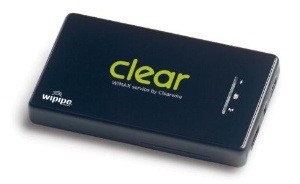 Clearwire announced the pending availability of the Clear Spot Personal Hotspot, which empowers Wi-Fi enabled devices to use Clear’s WiMAX service for broadband access. Clearwire is using a CradlePoint MySpot 4G router to create the hotspot. Customers connect their existing Clear modem to the CradlePoint router, and the hotspot is enabled for up to eight Wi-Fi devices. The router will sell for $149 and will be available in ‘early April.’

The interesting take on this development is Clearwire’s early positioning of the product as an alternative to existing 3G networks. “Since CLEAR is a true broadband Internet service, which just happens to be delivered wirelessly, we actually welcome the use of heavy bandwidth data applications that conventional 3G network operators may discourage or simply can’t support. In fact, we encourage our customers to use their Wi-Fi-enabled smart phones, or other CE devices, on our open network to receive better Internet connections,” says Scott Richardson, chief strategy officer for Clearwire in a company statement. That statement goes on to encourage (as noted below) 3G network by-pass for AT&T iPhone users, Wi-Fi enabled BlackBerry users, and even forthcoming Palm Pre users.

3G Smartphone Owners: Owners of an Apple® iPhone™ 3G and iPod® Touch, select Blackberry® smartphones or Windows Mobile phones, a G1 (Google’s™ first Android™ phone), as well as the upcoming Palm® Pre™, could connect to the Internet at speeds several times faster than their phones’ embedded 3G technology – without having to find a Wi-Fi hotspot.

Heck, according to this rationale, the combination of the new iPhone Skype app and Clear negates the need for AT&T’s network entirely for iPhone users. The Clear personal hotspot offers great visibility into the pending competitive battle among mobile broadband providers and all of the applications they empower. It’s going to get real interesting over the next few years.