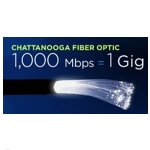 According to the New York Times, EPB plans to charge about $350/month for the service. As an industry, we’ve been undergoing ‘my broadband’s bigger than your broadband’ battles for several years now, as telecompetitors look to outdo each other with faster and faster broadband speeds. Broadband is shaping up as the latest ‘does size really matter?’ debating forum. I can remember when 3 Mb/s was a huge step forward – and that wasn’t that long ago. EPB now offers a tier that’s 333X faster than that.

Does anyone need that speed today? Will they in the next few years? The short answer is no. It’s kind of akin to people in the U.S. that buy a Ferrari or Lamborghini – all that power and speed, and nowhere to really use it. A more apropos question, is how many people can afford it – especially in a city the size of Chattanooga?

I love EPB’s CEO Harold DePriest’s response to the question of why 1 Gb/s? He tells the New York Times “The simple answer is because we can.” Which really sums it up, because there is no real business case, other than the notoriety and publicity it brings his company. There’s something to be said for that publicity – it’s free marketing and puts Chattanooga on the global map as a highly advanced and wired city. There’s nothing wrong with that.

Will there be a time when 1 Gb/s is an offer that is truly in demand? More than likely, although I still find it hard to imagine it being really necessary in a residential setting – I mean how many 3D movies can you watch at one time? Maybe a service that bursts to 1 Gb/s in times of need, but an always on symmetrical 1 Gb/s connection? Truth be told, no one really knows what the future holds, especially from a bandwidth demand perspective.

For now, I think EPB is quite content being way ahead of its time. After all, being a Ferrari dealer has its perks and there are always a few people willing to buy them.

19 thoughts on “Chattanooga’s EPB Offers Residential 1 Gb/s, But Why?”