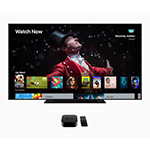 Charter will offer its Spectrum pay-TV service as an app on Apple TV later this year. The Apple TV Charter app will provide access to the Charter lineup to nearly 50 million households, according to an Apple press release.

In addition Charter will add Apple’s TV 4K offering to its lineup. AppleTV 4K offers 4K HDR movies. Charter is joining DirecTV Now in the United States,as well as operators in other countries that are offering Apple TV 4K.

The Apple deal is not a first for Charter, which is the second largest U.S. cable company. Charter in late 2015 began offering its programming through an app on the Roku streaming platform. The Charter Roku app can be access on any television connected to a Roku device. These include set top boxes, streaming sticks and Roku-powered TVs.

Comcast also has been pursuing similar deals. In early 2017 Roku released the beta of the Comcast’s Xfinity app. It includes an enhanced viewer guide that includes graphics, personalized recommendations and detailed information that makes content searching and discovery easier.