Home » Charter and Comcast to Offer Mobile 5G, Thanks to Verizon 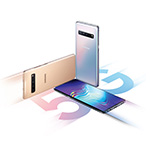 Announcements about plans to carry the latest Samsung 5G phones have come out from multiple service providers over the last few days, including from cable companies Comcast and Charter. For both companies, the news represents their entry into the 5G market, but neither company has built a 5G network yet. Instead, both companies will resell Verizon 5G service.

Comcast, which sells mobile service under the Xfinity Mobile brand, will carry the Samsung Galaxy S20+ 5G and Galaxy S20 Ultra 5G. Charter, which uses the Spectrum Mobile brand, plans to offer both those models and the Galaxy S20 5G. The new Samsung line will include several enhancements, including new camera options such as greater zoom capability and artificial intelligence to recommend the best shots.

Devices will be available beginning March 6.

Comcast has a limited offer that gives new customers $300 off certain Samsung devices, including the 5G models, and gives existing customers a $300 gift card for purchasing any of the same devices. Neither company announced pricing for the devices, but Samsung’s suggested retail pricing on the new 5G models ranges from $999.99 to $1399.99.

Both Comcast and Charter use a WiFi First approach to mobile serving, meaning that they use a combination of Verizon cellular service and their own and other cable companies’ Wi-Fi infrastructure to support their service. The companies have gained a small but growing market share in a highly competitive wireless market, where both companies offer an unlimited service offering as well as a differentiated offering that gives customers the option of paying per gigabyte used.

Comcast’s press release about 5G plans notes that the company “plans to launch 5G data options soon,” but did not provide additional details.

Charter executives have said before that the company is considering deploying its own 5G network. One exec said the company believes it can deploy 5G more economically than other companies because of its dense small cell infrastructure. The company is particularly interested in licensed and unlicensed spectrum the 3.5 GHz band, he said.