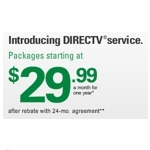 DISH Network isn’t exactly hitting its stride with telco resale partners. A couple years back, they lost their prized AT&T partnership and now history is repeating itself as CenturyLink has decided to switch DBS resale partners from DISH to DirecTV. It’s a significant victory for DirecTV, who can now count the top four (soon to be three after the CenturyLink-Qwest merger) U.S. telcos as resale partners.

The CenturyLink move is a similar scenario to AT&T’s selection of DirecTV. Like AT&T, Centurylink was a DISH resale partner during an acquisition process of another large phone company who happened to be a DirecTV resale partner — Qwest in CenturyLink’s case, BellSouth in AT&T’s case. In both cases, it appears DirecTV prevails as the DBS partner of choice for the new merged company. I say appear, because technically the CenturyLink-Qwest deal is not complete.

CenturyLink will continue to serve its DISH customer base, but will stop marketing it as a part of their triple play bundle, or stand alone video option. This leaves DISH with Frontier,  Windstream, and FairPoint as its largest telco resale partners.

What’s more interesting to me though is CenturyLink’s IPTV plans, especially after the Qwest acquisition closes. Will they accelerate their IPTV ambitions, or slow them down in favor of more DBS resale? CenturyLink has several IPTV markets up and running, with their CenturyLink Prism product, using the Microsoft Mediaroom platform over DSL. They’re in the process of launching a large market or two, including Las Vegas.

2 thoughts on “CenturyLink Dumps DISH, Launches DirecTV – What About IPTV?”