Ownership of digital content will surpass that of traditional content over the course of the next few years, according to the Consumer Electronics Association’s 17th “Annual CE Ownership and Market Potential Study. Widespread adoption and use of smartphones are key drivers.

Following TV sets and DVD/Blu-ray players, smartphones are the third most-owned consumer electronics (CE) devices in the U.S., CEA points out in a press release.

In addition to smartphones, tablet penetration among U.S. households rose to 54 percent. Tablet ownership’s 2015 rise was the largest among CE devices CEA tracks for its annual study, foisting the handheld mobile devices up on to CEA’s top 10 list for the first time.

Wearable fitness trackers are another fast growing CE device category. Eleven percent of U.S. households now own the wearable connected devices, more than double that in 2014. 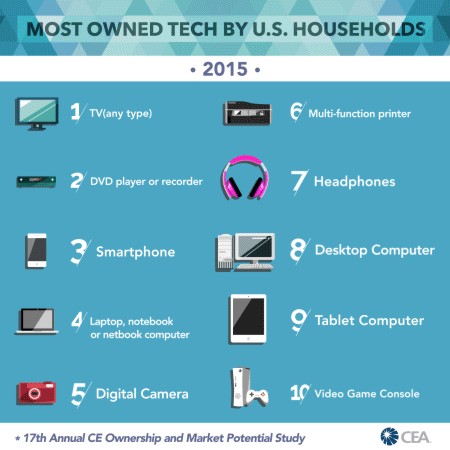 The Smart Home
Similarly, household ownership of smart home devices, such as smart thermostats, lighting controls, motion sensors and the like, rose to 12 percent this year. In addition, smart watch ownership rose to five percent, with six percent of U.S. households saying they plan to purchase a smart watch at some point in 2015.

Added Shawn DuBravac, CEA chief economist and author of the New York Times best-seller “Digital Destiny: How the New Age of Data Will Transform the Way We Work, Live, and Communicate”: “We are at an important inflection point as consumer demand for emerging technologies accelerates.

“While the emerging product categories are owned by less than five percent of the American population, these categories are expected to make significant contributions to the CE industry bottom line in 2015 and redefine the course of technological innovation moving forward.”