Consumer willingness to pay for any product or service sometimes is tough to predict. The classic case is the Apple computer, whose business plan, had there been one, would have talked about the market for an “easy to use personal computer.

In more recent days, the sudden success of the Apple iPad, after more than a decade of failure by manufacturers trying to create a successful product, might lead, in retrospect, to the observation that early tablets were trying to create a “work” device that would support handwriting, for example, instead of being conceived as a content consumption device.

But a “content consumption” device would not have made so much sense until the robust development of iTunes for music, the Apple App Store for applications and a really-good touch interface.

Decades ago, many observers would have had a hard time imagining that most U.S. consumers would actually pay for “television,” then conceived as a “no incremental cost” over the air broadcast service. Today, most television viewers watch programming they pay for as part of video subscriptions.

The point is that one cannot always predict what consumers will pay for, much less “how much” they will pay. But NPD Group thinks a test is coming.

If all those background trends do not change, bringing all into line with relatively similar growth rates for household income, background inflation for all other goods, and video subscription prices, then a potential customer crisis will ensue.

To be sure, we cannot predict what video ecosystem stakeholders will do to moderate the rate of increases, whether they can do so, and what consumers will decide to do.

In a worse case scenario, where neither wage growth nor background rates of inflation match video service price inflation, the 16 percent of U.S. households do not currently subscribe to video services will grow. The only issue is how much the non-buying population would grow.

NPD does not seem to think the current business models are sustainable, though. “As pay-TV costs rise and consumers’ spending power stays flat, the traditional affiliate-fee business model for pay-TV companies appears to be unsustainable in the long term,” said Keith Nissen, research director for The NPD Group.

One suspects push-back from video distributors will at some point become intense, since it is not likely content owners and networks will voluntarily curtail their own costs. Sports programming will most likely continue to be the flashpoint.

Many observers would say the recent $2.1 billion purchase of the Los Angeles Dodgers makes sense only if television revenues grow handsomely. In other words, without dramatically higher TV revenues, the owners of the Dodgers will have significantly overpaid for the asset.

But that is just one example of the “price creep” that continues to drive subscription video programming costs higher. It is hard to way when it will break, or whether ecosystem participants are nimble enough to shift in time to save the model.

There is, of course, the popular answer that consumers will simply stop paying for such video services and get whatever they can online. Up to a point, that might work for some consumers. But there’s the conundrum. People will not willingly give up their favorite shows and channels. But neither can they simply continue to pay eve-higher sums.

Also, unless the live sports, news and entertainment fare most people watch also is available online, there will not be massive abandonment of video services for online alternatives, until people simply choose to live without a product they enjoy.

One suspects distributors will be forced to separate out sports programming, before that breaking point is reached, even if programmers don’t like the idea. That will have severe financial repercussions for sports programmers, though. The ad-supported channels are widely purchased. The premium channels are not so popular. A sports tier will drastically slash viewership, which will significantly slash audiences and therefore ad potential. 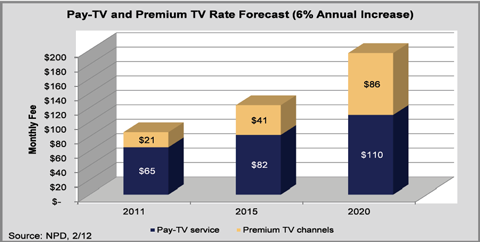