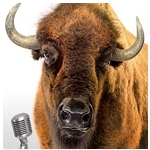 Frontier has a new marketing campaign, centered around a “6 feet tall, 8 feet long and 2,000 pound” Buffalo named Frank. The tier 2 telco with extensive rural markets says the campaign will begin immediately and will include broadcast, print, digital and social media, billboards, truck wraps, and more.

Frank’s first mission is to push Frontier’s $19.95 DSL service. Frontier launched this promotion back in February. The deal requires customers to also subscribe to Frontier home phone service. It offers a three-year price lock, with no termination or contract required. Frank also appears to be pushing FiOS Internet from Frontier, suggesting that this promotion also includes FTTH service, which Frontier acquired from Verizon back in 2010. Regardless of access method, the $19.95 deal is for 6 Mbps broadband.

“We wanted a spokesperson that could connect with customers and make them smile, and an iconic American Buffalo with a touch of attitude stole the show. We are confident that consumers will like Frank and enjoy his observations about life, technology and Frontier’s products and services,” said Cory Jones, Vice President, Marketing in a press release.

Frank will be pushing more than DSL in the coming weeks and months. He already has his own Twitter feed and YouTube channel. Their tagline is “You can’t get BS from a buffalo.”

3 thoughts on “Can a Buffalo Help Sell DSL Service?”