Home » Cable TV Prices were Higher in 2011, But What it Means is a Subtle Matter

Video subscription services are odd products, in a way. Because the actual product is an experience, and since the experience can include any number of specific channels, it is difficult to directly compare “products” by price, in the same way that one cannot easily compare mobile service experiences across smart phone and basic phone buyer bases, or plans with bigger or smaller buckets of usage. The price of the smart phone experience is higher, but the experience also arguably has much more value.

Something like that process applies to video entertainment services as well.

The average monthly price of expanded basic service (the combined price of basic service and the most subscribed cable programming service tier excluding taxes, fees and equipment charges) for all communities surveyed increased by 5.4 percent over the 12 months ending January 1, 2011, to $57.46, compared to an increase of 1.6 percent in the Consumer Price Index (CPI), the Federal Communications Commission reports.

You might expect that prices would be lower in markets that were more competitive. The answer is both “yes” and “no.”

Over the 12 months ending January 1, 2011, the average price of expanded basic service increased by 5.2 percent, to $56.82, for those operators serving communities where the FCC says there is “no effective competition.”

The reason is likely that, where there is competition, contestants add more channels in an effor to differentiate themselves, and that drives the higher cost.

“Overall, for expanded basic service, the effective competition price is higher by 2.9 percent compared to the noncompetitive group average,” the FCC says. 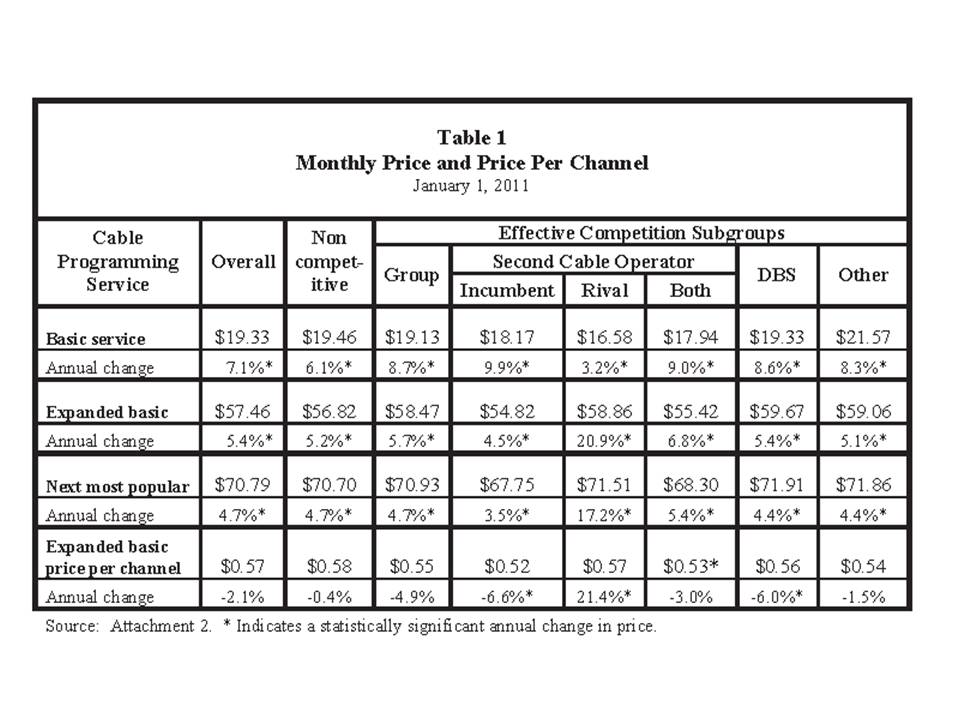