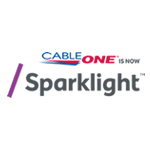 Cable ONE announced its intention to rebrand as Sparklight in 2019, back in December 2018. That day has come as starting this month, Sparklight is now the new name and brand for the top ten cable MSO.

The Sparklight rebrand completes a journey for Cable ONE from that of a traditional cable company to a broadband-focused service provider. It’s a well-documented move that seems to have served Sparklight quite well. So much so that Cable ONE reported last year that the company had the highest and best profit margin in the cable industry.

At a recent NCTC event, Sparklight SVP of Technology Services Ken Johnson noted that only 15% of Sparklight’s homes passed subscribe to video. That’s a remarkable number, even for a traditional cable company that has made the transition to lead with broadband.

Sparklight doesn’t think its customers don’t want video anymore. The company has just decided that the traditional method of delivering video no longer makes economic sense. It would rather provide high-speed broadband, and let customers get video through OTT options, or subscribe to higher cost traditional video (that passes on frequent programming rate increases and retransmission costs to the subscriber), if that’s their preference.

Sparklight does have data caps, ranging from 300 GB for its 100 Mbps package to 1.2 GB for its gigabit service, charging an additional $10 for every 100 GB beyond the allotted bandwidth. By that measure, the company seems to be hedging against too much OTT usage. It’s a strategy that appears to be paying off for now.