As what is forecast to be an above average hurricane season gets under way, C Spire is reminding subscribers about its priority voice and priority data service for emergency first responders’ mobile communications.

Both services are available for free to eligible emergency response agencies – which include state and local government, police, fire and other designated public health and safety professionals.

Forecasters say the six months ahead could include formation in the Atlantic Ocean of as many as 20 tropical storms (with wind speeds of 39 MPH or higher), 6 to 10 hurricanes (74 MPH or higher) and three to five major hurricanes (111 MPH or higher winds), according to a C Spire press release.

“In an emergency situation, essential voice and data communications are critical for public safety and emergency responders who need to get through as fast as possible,” Brian Caraway, the general manager of C Spire’s wireless division, said in the press release about the C Spire priority data service and voice service.

C Spire provided a link for eligible subscribers to sign on for the priority services.

The idea of priority data access for first responders may have originated with AT&T’s FirstNet network, a mobile data network that uses dedicated spectrum. AT&T is allowed to put commercial customers on that spectrum when it is not in use by first responders, but first responders who subscribe to FirstNet service have priority on that network – and on AT&T’s broader network.

Today’s press release isn’t the first time C Spire has touted its priority data service and priority wireless service. The company previously highlighted the services during the hurricane season of 2018. 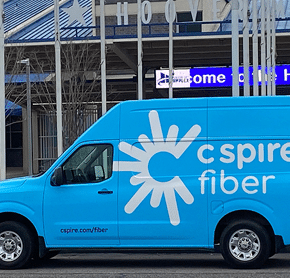